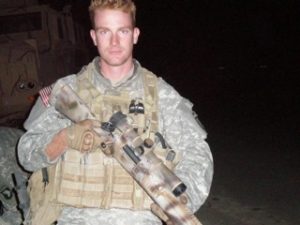 On April 29,2008, the local faction of insurgents called JAM started to pick up the pace of the spring fighting. With a massive dust storm making visibility almost zero, his unit received new orders to drop off water at the local Iraqi police station. Byron was the driver of the third truck. After turning out into the city on a large 4 lane divided road and driving another 300 yards, an EFP (a type of armor piercing IED) hit his right passenger door. 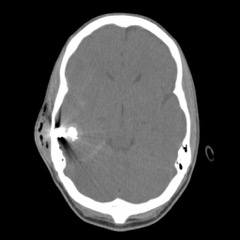 With his vision impaired and sharp ringing in his ears Byron reached up and wiped blood from his face. Looking to his right, he realized that his squad leader was slumped forward motionless against the dash. With the Humvee on re and still moving, Byron stopped the vehicle and jumped out. The gunner of his truck by now had started yelling he was hit in theback seat. Byron jumped back in and grabbed him under his arms and dragged him out and behind the truck. Byron then ran back to my truck to grab his kit for his aid pouch and applied a tourniquet to the gunners leg but could not because he was shaking so violently. At that time the medic and other squad leader took over and loaded them in a truck and taken to the aid station. Byron did not realize he was hit, only thought his eardrum had been burst. During the ride, he was told his squad leader was KIA. 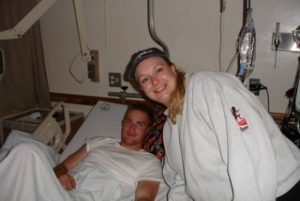 At the green zone Byron was checked over by an uncountable amount of medical personnel. A doctor walked in with a CAT scan photo and told Byron, “It looks like you have an AK round in your head.” Later he was transported to Landstuhl, Germany, to have a craniotomy to remove the object. It wasn’t an AK round but a piece of shrapnel from the blast, which he saved. He was then sent to Bethesda Naval Hospital in Washington D.C. for two weeks of recovery and the next two years would be spent at Walter Reed Army Hospital also in Washington D.C.

Diagnosed with moderate TBI, PTSD, vestibular hypofunction, and a wrist that pops out of place constantly, Byron endured two solid years of intense physical and mental therapy all while continuing his mandated education. One of the classed he chose was photography where he discovered hitting the streets of D.C. to randomly explore and capture images was great therapy and thus created his passion.